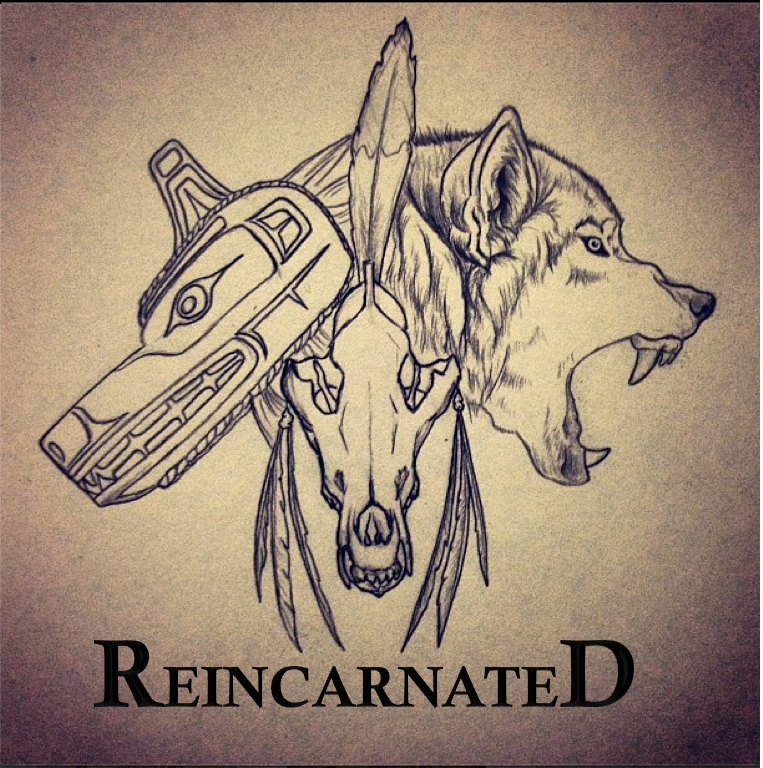 His new series highlights both the forgotten men and women of color that risk and lose their lives daily protecting these endangered species in the often-whitewashed arena of conservation, and the future of the species themselves. It’s first piece garnered critical acclaim, being named the youngest of 10 finalists out of more than 300 entries for the United Nations and CITES World Wildlife Day Poster for 2016, and has drawn the attention of the likes of R&B Star Jhene Aiko.

“Whilst public campaigns by major organizations focused on the trade in these species focuses on the glitz and glamour of white, privileged Hollywood actors, actresses and models, those that actually die for these creatures are overlooked and underfunded. The issue of race in conservation and in the animal field is one I am all too aware of from first hand experience, and the statistics speak for themselves. I want to instil a sense of pride and representation within the communities that live alongside these species, to inspire protection and the importance of keeping these species alive for both these communities and the environment at large”

It’s arena and subject that plays all too close to home for Nayana (pronounced 9 - a ). For starters it was what sparked his creative uprising.

As the first young black male to enter Veterinary in the University of Adelaide’s new rural Vetschool, he experienced the racial bias firsthand, with even senior lecturers noting that he was being singled out due to his race. This cumulated in a surprisingly blatant case of racial profiling, where a photo of Nayana Halloween costume with a toy gun (dressed as will smith in I am Legend with his dog Angel) on his personal Facebook profile was used in a legal restraining order, with a lawyer calling his mother claiming students felt threatened by the image.

All this despite being a rural campus where the very student body that felt ‘threatened’ posts photos of themselves shooting real semi automatic firearms, posing next to dead animals they hunted, and, the icing on the cake, the actual Vet Faculty Facebook page having a photo of two students holding toy guns, with one pointing it to another students head captioned “BANG”, the only difference being they where white.

His mother was notified whilst Nayana was studying for final exams and stated he was to be removed from the university and have a restraining order placed on him for the presence of a gun in his Facebook photo.

After pleas from his mother that he be allowed to sit the exam, her stating the fact that it was a TOY gun and costume for which she had taken the photo, the case was kept quiet until his exams had finished. After which he was promptly called by the principal of the residential college, who said he had a complaint from students about a photo of Nayana with a gun, to which, when informed that it was a toy and a Halloween costume, he stated that Nayana had shared Tupac songs on his Facebook that had violent lyrics. Nayana was served a legal document stating his photo was against university policy and a restraining order for being seen as a threat.

The absurdity of this was even more so when given the fact, it being a rural campus, over half of the vet students and agricultural students (all white) had photos of them hunting animals with real guns, and even profile pictures shooting real submachine guns. And the university page had an exact same costume photo of a white female student holding a toy gun, the only difference being she was actually pointing it at another student’s head with the caption “BANG!”. Even when this discrepancy was brought to attention, the principal, David Purdie, stated, “Nayana if your seen as a hip hop guy you have to understand it comes with its consequences”

The university continued with their legal action against Nayana, blatantly racially profiling him and settling with him having a restraining order against him from attending the residential college and being ʻallowedʼ to finish the course and graduate.

The build up of institutional racism and the extremity of an actual courtcase with the inability to fight back (due to lack of resources in Australia to tackle or bring light to racism) re-sparked the creative torch within him. 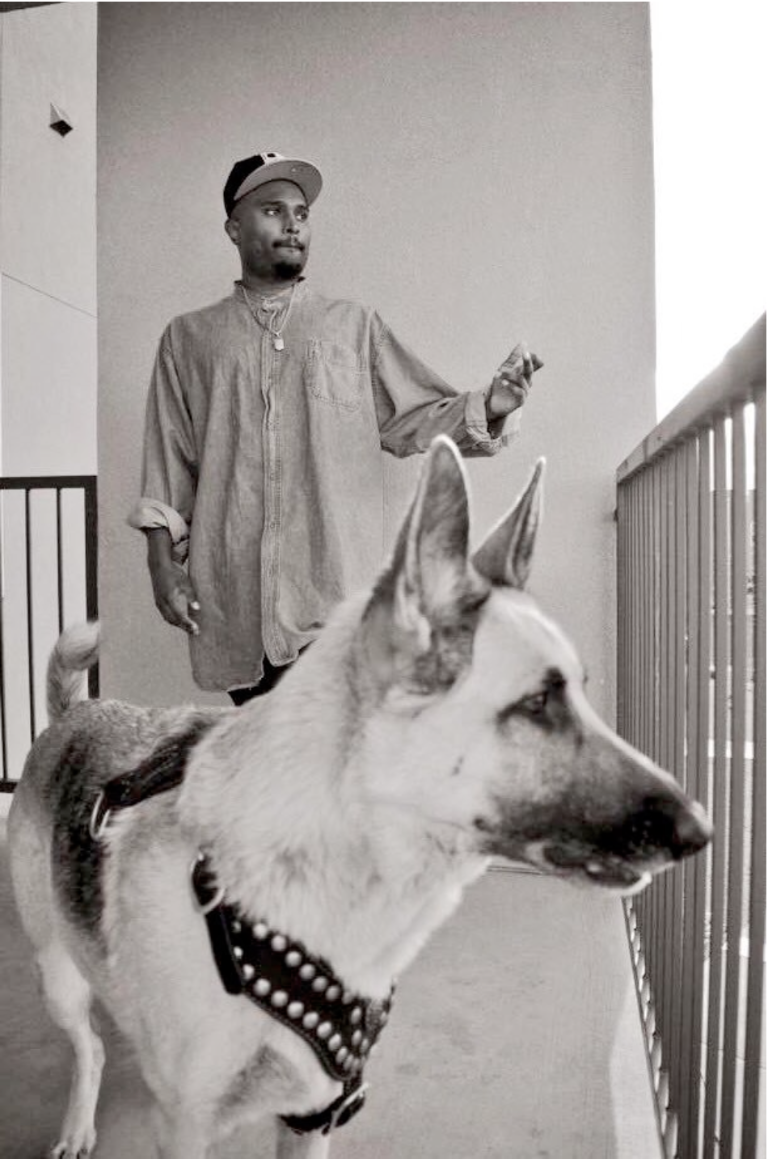 Changing his name to Lobo, (inspired by Lobo, king of the Currumpaw, the famous outlaw wolf), initially for legal reasons to protect against further court orders and since he was being trailed by university officials whilst still in the course, he started drawing a picture a day for the entirety of 2013, which quickly garnered attention globally, especially here in the USA. Since the work was fresh and chronicled the continuing legal troubles he was facing before graduation, he kept the story behind the works as analogies told in pictures. 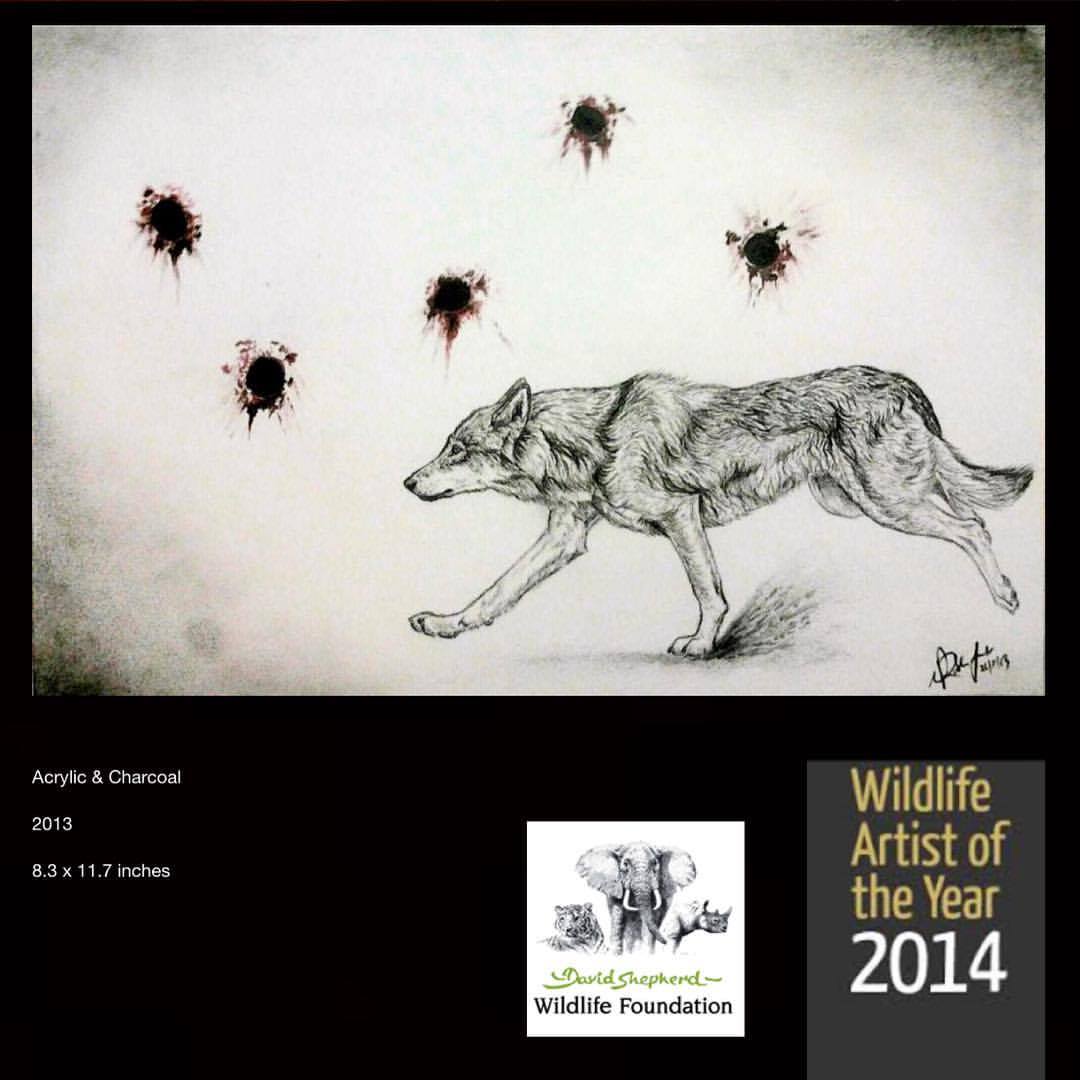 Artwork: i | Don't Shoot I want to Grow Up. Charcoal and Acrylic on Paper

One of the works, titled “Don’t Shoot I want to grow up” was done after the Trayvon Martin verdict was announced. It was especially poignant and personal as it expressed the same profiling Nayana had experienced, again as an analogy. The piece garnered critical acclaim, being a selected finalist in the David Shepherd Wildlife Artist of the Year 2014 Exhibition in London.

The magnum opus piece of that year chronicled the entire restraining order and profiling case in a large scale painting, again hidden within a broader historic analogy. Entitled Wolf Wars, and completed at the close of 2013, the piece was unveiled at Art Basel’s Wynwood Art Walk in 2015. The document represented the legal document Nayana was handed, with the ranching and sports hunting communities on the shoulders of the university officials (two areas Nayana had been in vocal opposition of due to their trail animal abuses during his time as a student). The ear tag on the cow contains the postcode of the residential college, representing the student body that petitioned to have him targeted and removed. With the wolf, Lobo King of the Currumpaw, in the center, representing himself.

The analogy chronicles the ranching and hunting communities history in America of targeting Native American’s and Wolves as scapegoats to increase profits in their respective industries. The mantra of colonial generals was, first destroy the buffalo, then the Indians won't have a food source and we’ll have room for cattle ranches. The last survivors where the wolves, and the war on wolves began across all 50 states, effectively eradicating the species from 90% of their original range. It’s an issue that betrays the disrespect and genocide of Native Americans at the same time; wolves are spiritual brothers to the first peoples. Sitting Bull, as legend has it, found a wolf in a trap when he was 16 years old, the wolf said help me brother, and your name will be as big as mine. Just as the prophecy foretold, Sitting Bull went on to become the most famous Indian Chief, who was tragically murdered in the Wounded Knee Massacre. 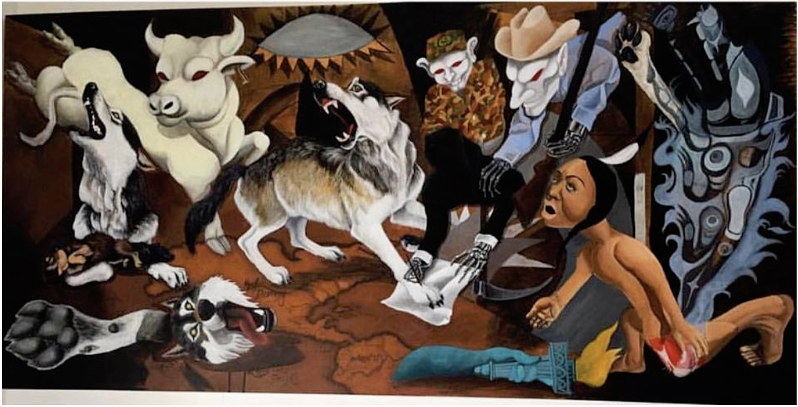 The painting was a method of telling the pain and hiding within that the story which occurred to him, and for which he took the artist name, Lobo Reincarnated.

It was shocking, and unfortunate that the events at Standing Rock, North Dakota, the site of the Wounded Knee Massacre and Sioux tribe of Sitting Bull, would again make headlines in 2016 for atrocities against First Peoples by the hands of militarized police for the Dakota Access Pipeline. And a painting that was analogous to a historic event to tell Nayana’s personal story of racial profiling and targeting again became relevant in 2016. And furthermore, with the appointment of the Trump Administration and its White Nationalist ties, who have set their targets on removing the endangered species protections on Grey Wolves for the appeasement of Ranching and Sports hunting lobby’s, once again America’s Wolf Wars are about to be reinstated for four more years.

Entirely self-taught, Nayana began drawing at the age of 4, displaying precocious talent from an early age. Seeing the extant of suppression he would face in Veterinary and how his voice and message was reaching a global audience unhindered and unstifled by racist supervisors and peers within the university, he realized the power of art in being a voice for social change, and having the ability to truly reach a global audience transcending race, class and social status.

And in the current political climate we are heading into as a world, the importance of art as a tool for communicating science, justice and bringing light to the dangers we must act upon as a species for our planet’s survival has never been more important.

In a sense, he truly realized the potential of the gift he had been given.